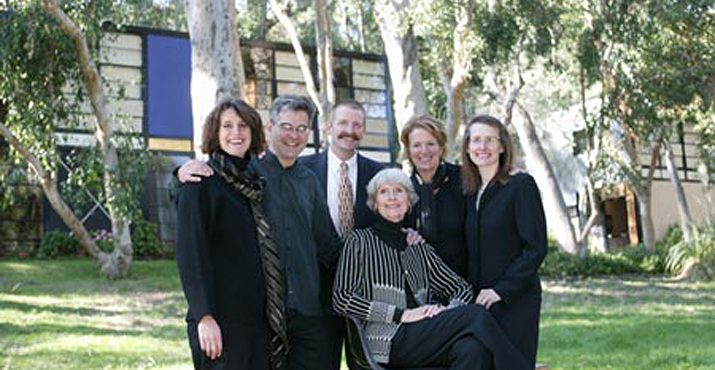 From the earliest days, even before the Eames House was finished, people visited it. Through the years, Charles and Ray graciously welcomed visitors. Visitors have shared with us stories of being invited in for coffee and cakes or even a shot from a bottle gifted by the Eameses’ friend, Eero Saarinen.

So it felt right to the family to continue this tradition of sharing the site with visitors. That visceral experience is key not only to understanding any site, but also to learning from the site. Charles and Ray believed deeply in the value of direct experience, and the ability of people to internalize knowledge. A designer of indoor and outdoor furniture, Lucia Eames was the daughter of Charles Eames and founded the Eames Foundation. She oversaw the collecting and preserving of the family’s legacy. As the matriarch of the Eames Family, she delighted in her five children, seven grandchildren, and four great-grandchildren. She lived in Sonoma County.

Read More about her amazing life. Eames Demetrios embraces the challenge of preserving the Eames House both as a masterwork of architecture and a place that was simply and wonderfully a family home. Eames wears several professional hats: filmmaker, writer, creator of 3-Dimensional fiction Kcymaerxthaere, and Director of the Eames Office. A lecturer and consultant on design and other topics, Eames is married with two children and lives in Los Angeles. Byron Atwood is the president of the Foundation and self-described “enthusiastic participant” in the family’s efforts to share the works of Charles and Ray Eames for the benefit of all. Byron is the owner and operator of a machining and fabrication business in New England and also manages the Eames family’s finances. He is married with three children and four grandchildren. Board member Carla Atwood Hartman believes that the Eames House is an essential touchstone that is critical to her work with museums, schools, and the public. She is also passionate about chairs, and teaches Chair Camps at museums and galleries across the country, including the Denver Art Museum, where she worked for twelve years. A resident of Denver, she is married with three adult stepsons and a standard poodle. Board member Lucia Dewey Atwood treasures her memories of interning with Charles and Ray Eames in 1977, and of working with Ray during the last years of her life. Living in the Eames House for the year after Ray’s death informed her decision to focus on overseeing the care and preservation of the House. After a career in banking, she returned to Los Angeles with her husband.

Board member Llisa Demetrios began her professional career as an archivist at the Mies van der Rohe Archive at MoMA in New York, and continues her services as archivist/registrar for the Eames Family Archives. She is a bronze sculptor, married with two children, and lives in Sonoma County, California.

The Charles and Ray Eames House Preservation Foundation, Inc. was established in 2004 in order to preserve and protect the Eames House and to provide educational experiences that celebrate the creative legacy of Charles and Ray Eames. It is a not-for-profit organization officially recognized by the IRS as an organization described within the meaning of Section 501(c)(3) of the Code.