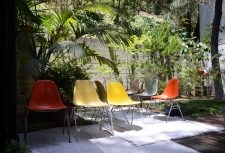 Wrapping Up 2020 at the Eames House

2020 was a challenging year for many. Around the world, many suffered the loss of a loved one during this terrible pandemic, or faced economic hardships as businesses and places of work shut down. Many historic and cultural sites, normally places of comfort and learning during difficult times, have had to remain closed to stop the spread of the virus.

We at the Eames House miss opening our site to visitors from around the US and the world, and sharing directly with them the lives of Charles and Ray Eames. Yet, even as museums closed to comply with California’s state-wide “Safer-at-Home” orders, we all found new ways to live and work this year.

As we begin 2021, we are hopeful that we will welcome our visitors on site again, but in the meantime we will continue our hard work behind the scenes to preserve the Eames House and educate the public (virtually!) about our work. Charles and Ray delighted in sharing their home with others. Even before the house was completed, people would drop by to see how the couple was responding to the Case Study House challenge and how their approach could contribute to solving the then-housing shortage. The couple continued to open their home to visitors from around the world for the rest of their lives.

They also shared the ideas of their home more widely beginning with the first articles in Arts and Architecture magazine and their 1955 slide show House: After Five Years of Living.

When the Eames Foundation closed to the public in March 2020, per state and local requirements, we shifted our focus to building virtual experiences that we hope will provide a window into the visceral understandings gained by being on-site. We have been creating and sharing videos covering a variety of topics, from flower arranging to questions commonly posed by past visitors. We encourage you to check out two videos highlighting  memories of staff member Shelley Mills, married to Charles’s grandson Eames Demetrios: how the 1994 Northridge earthquake impacted the Eames House, and what it was like to work at the Eames House after Ray’s death. You can find them on our newly-launched Eames House Youtube!

A particular favorite behind-the-scenes work is our archiving project.  As you may know, the Eameses’ home studio has had many uses throughout the years, from a working studio (complete with dark room) and skunk works, to a guest site and, after Charles’ death in 1978, Ray’s bedroom. It effortlessly shifted configurations in response to new needs. After Ray’s death in 1988, the new need was a space to caretake and share the house with visitors, so many of the Studio’s contents were stored. We have been augmenting our archive records and expanding our understandings. We look forward to sharing them in upcoming videos this year, so stay tuned!

2020 was a very special year for the Eames House: the 70th anniversary year of construction, with Charles and Ray moving into their home on Christmas Eve, 1949. The year started strong, with multiple events lined up in celebration of this special 70th year anniversary.

In February, Herman Miller sponsored a film screening at the Eames House! Projecting the Eameses’ films on site with the Eames House, meadow, and ocean as backdrop gave a new dimension to the couple’s films, especially as their 1955 slide show House: After Five Years of Living was shown.

In March, our pivot to virtual engagement began as museums were required to close. With all the uncertainties, many of our events, including being featured at the 2020 AIA Conference in Los Angeles, were cancelled.

A bright spot in March 2020: we could hear Ray! The Royal Institute of British Architecture (RIBA) release an audio of Ray Eames’ 1979 acceptance speech – the first by a woman – of the Royal Gold Medal award. They honored the Office of Charles and Ray Eames in the year after Charles’ death. A shout out to RIBA!

Soon after, Ray was highlighted in May. The New York Times published an article for their recurring series, the Mrs Files, that as they wrote, “looks at history through a contemporary lens to see what the honorific ‘Mrs.’ means to women and their identity.” The article offers a great perspective on Ray’s beginnings and highlights her work at the Office of Charles and Ray Eames, where Ray played an equal role to Charles. As Charles famously said, “Anything I can do, she [Ray] can do better.” In June, we transformed our annual Members Appreciation Day celebration into a virtual event open to all. In lieu of inviting members onto the site for a special day of Eamesian activities, we offered making activities, a flower-arranging class, conservation interviews, docent insights, and memories presented by Eames family members in a series of videos. They, as well as our commemorative fortune teller (at left) can still be accessed through our website! In November 2020, the Eames House Conservation Management Plan (CMP) was honored by Docomomo. This holistic approach to conservation planning, published in April 2019 by the Getty Conservation Institute (GCI), received a Survey Award of Excellence at Docomomo’s 2020 Modernism in America Awards. The CMP is available free online. It celebrates all those things that make the Eames House significant, and identifies policies to makes sure that they are conserved for future generations. A shout out to the GCI for receiving a second award, a Special Citation for Documentation for their Keeping it Modern Initiative and Conserving Modern Architecture Initiative!

Most recently in December, the Eames House was featured in Forbes as one of the “Top 10 Los Angeles Design Hotspots for the Post-Pandemic World”. We look forward to welcoming back our visitors from around the country and around the world, and sharing with them the life and legacy of Charles and Ray. We continued to offer our Eucalyptus LTR Memberships this year, but very few remain! Members receive a limited edition Eames LTR made from Eucalyptus trees (reluctantly) cut from the site during landscape conservation work. Instead of being chipped, the wood was repurposed into this limited-edition Eames LTR. Founding Sponsors Herman Miller and Vitra donated a select series of red-toned wood LTRs to the Eames Foundation as a fundraising opportunity. A few memberships remain, so you still have a chance to join and share in this special opportunity! Obtain your own here.

Thank you to all of our members and donors who contributed during this difficult year. If you would like to support the Eames Foundation, you can help by donating, becoming a member, or purchasing an interior tour gift certificate. Memberships will have a start date once we reopen to the public so you may take full advantage of visiting, and interior tour gift certificates will remain valid for one year after our reopening date. If you would like to purchase a gift certificate, please email info@eamesfoundation.org.